Flatten the curve in your browser here!

May 23, 2020
'Flattening the curve' has been the reason why we've been encouraged to stay home and restrict our social interactions. When you flatten the curve, you make sure that not too many people get COVID all at the same time, and that's good for your country's healthcare system.
To understand the spread of an epidemic, scientists use a variety of mathematical models, the simplest of which is the SIR model. SIR stands for Susceptible, Infected and Recovered, which are the three states that every person in the country can take. Like this:
You start being susceptible. With a certain probability (infection rate,) you become infected. And then, you recover, according to the recovery rate. With some illnesses, post-infection immunity isn't granted, so there's a loss of immunity rate as well. If you lose your immunity, you become susceptible again.
The curve that we are interested in is the I curve.
Now it's time to flatten it. I've created a dynamical model with 10,000 people that lets you choose the infection, recovery and loss of immunity rates (see below.) But before you play around with it, let me show you the experiments I did.
First, a high infection rate (71%,) medium recovery rate (47%,) and no loss of immunity (loss of immunity rate equals zero): 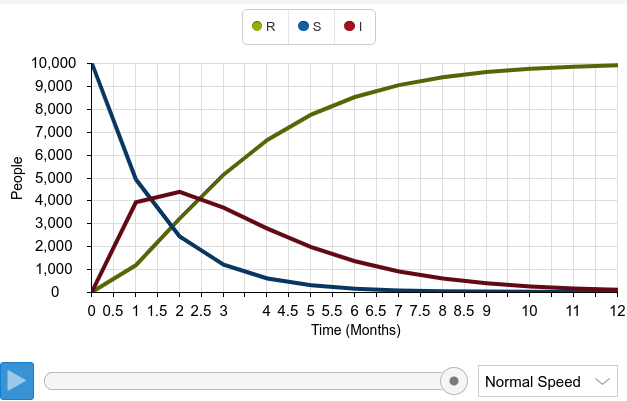 As you can see, the peak occurs at month 2 with more than 4,000 people. Remember we're interested in the red curve. Since people in this model don't die and every recovered person doesn't become susceptible again, in the end everyone was infected and recovered (green curve at ~10,000 at month 12.)
Let's say we implement a lockdown, so contact between people is reduced and the infection rate is reduced with it. I left the parameters as before, only this time I set the infection rate at 20%. Now the peak is still at month 2, but half as less people are infected: just over 2,000. Now that's flattening the curve! 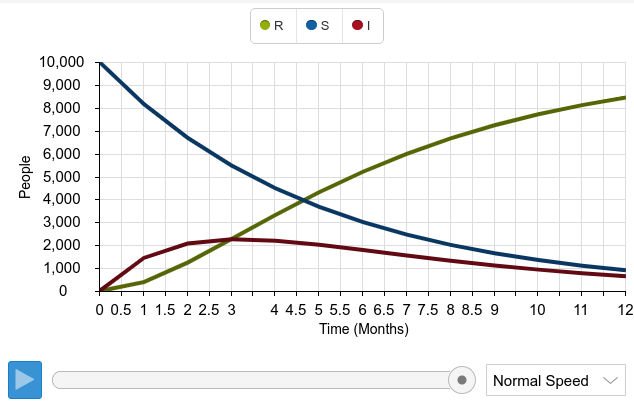 What do you think will happen if you make people lose their immunity? I'll let that one to you! Open the model below, play with the sliders and compare the plots. See what fun insights you can get.
Thanks for reading, and don't forget to subscribe!
(The model is best visualised in a computer, but it will also work on your phone; a standalone version of it is here.)